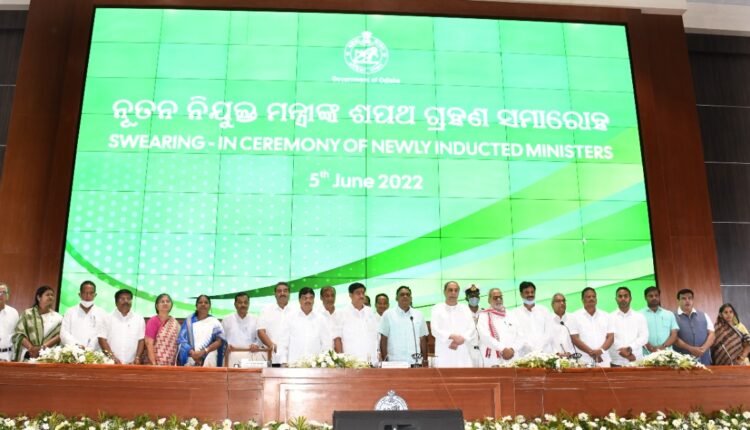 Bhubaneswar: A day after resignation of all the ministers, Odisha governor Professor Ganeshi Lal on Sunday administered oath to a 21-member new council of ministers of the Naveen Pattnaik government. Out of the 21 ministers, 13 are cabinet and 8 are state ministers.

For the first time, the Oath Taking ceremony was organized at the Lok Seva Bhawan (State Secretariat). Chief Minister Naveen Patnaik and other dignitaries graced the occasion.

Similarly, Jagannath Saraka and Ashok Panda got promoted to Cabinet rank from MoS.

Among the new Ministers, Mr.Dholakia is the only leader who was directly elevated to Cabinet status directly. Excluding him, all other new Cabinet Ministers have already served as a Minister during different terms of the Naveen Patnaik Government.

BJD insiders said that some of the senior leaders, who were dropped from the cabinet, will be given key roles in the organisation aiming at the 2024 general elections.

Before the reshuffle, for the first time in his 22 years of rule, Naveen had asked all Ministers to resign from their positions with immediate effect. There were 20 members in the last State Council of Ministers, of which nine were given Minister of State (MoS) status.