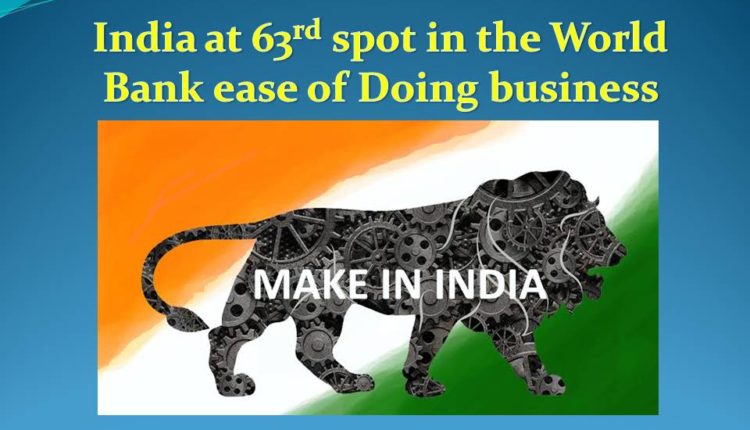 BiznextIndia : With several economic and administrative reforms, India has improved its position in the World Bank’s global Ease of Doing Business rankings. The country jumped 14 notches to be placed 63rd out of 190 countries on the back of “sustained business reforms”.

India, along with other top improvers, implemented a total of 59 regulatory reforms in 2018-19, accounting for a fifth of all reforms recorded worldwide, stated the World Bank in a release.

“India continues to be the region’s top-ranked economy, placing 63rd place in global ease of doing business rankings thanks to four reforms in the 12-month period to May 1,”  said the World Bank report.

“Among other improvements, India made the process of obtaining a building permit more efficient. Obtaining all permits and authorizations to build a warehouse now costs 4% of the warehouse value, down from 5.7% the previous year. In addition, authorities enhanced building quality control in Delhi by strengthening professional certification requirements. Importing and exporting also became easier for companies with the creation of a single electronic platform for trade stakeholders, upgrades to port infrastructure and improvements to electronic submission of documents” it said.

The report further said, that economies like Pakistan and Nepal have carried out several reforms to improve the business environment.

However, the World Bank report said , only half of the South Asia region’s economies carried out reforms in the past year. Afghanistan, Sri Lanka, Bhutan and Maldives did not make any regulatory changes. Some economies still fall considerably behind the global best practices. The region underperforms generally in enforcing contracts and registering property.