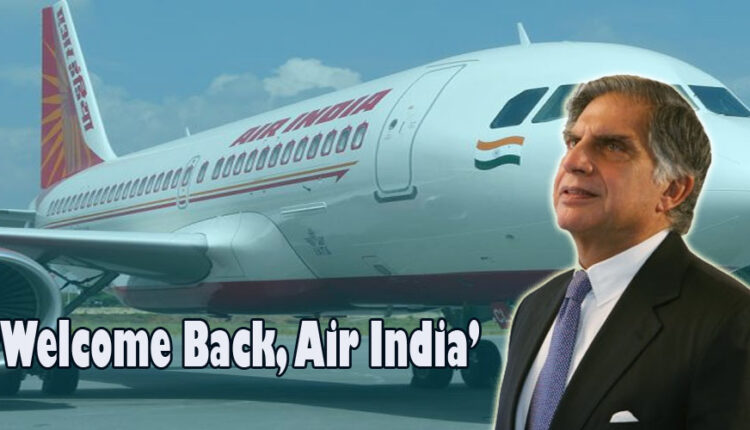 New Delhi : It is a homecoming for the Air India as Tata Sons has got back the airlines after 68 years.  The government on Friday announced Tata Sons, which has quoted Rs.18000 crore, as the highest bidder in the financial bid.

It is expected that the handover of Air India will be concluded by December 10, said DIPAM secretary Tuhin kanta Pandey.

“The Cabinet Committee on Economic Affairs  (CCEA) – empowered Air India Specific Alternative Mechanism (AISAM) comprising of Union Minister for Home Affairs and Cooperation Amit Shah; Union Minister for Finance & Corporate Affairs Nirmala Sitharaman; Union Minister for Commerce and Industry Piyush Goyal and Union Civil Aviation Minister Jyotiraditya Scindia approved the highest price bid of M/s Talace Pvt Ltd, a wholly owned subsidiary of M/s Tata Sons Pvt. Ltd for sale of 100% equity shareholding of Government of India in Air India along with equity shareholding of Air India in AIXL and AISATS. The winning bid is for Rs 18,000 crore as Enterprise Value (EV) consideration for AI (100% shares of AI along with AI’s shareholding in AIXL and AISATS).  The transaction does not include non-core assets including land and building, valued at Rs 14,718 crore, which are to be transferred to GoI’s Air India Asset Holding Limited (AIAHL)” a government press release said.

The Tata Group winning the bid for Air India is great news! While admittedly it will take considerable effort to rebuild Air India, it will hopefully provide a very strong market opportunity to the Tata group’s presence in the aviation industry,” Tata tweeted.

“On an emotional note, Air India, under the leadership of Mr JRD Ttata had one time, gained the reputation of being one of the most prestigious airlines in the world. Tatas will have the opportunity of regaining the image and reputation it enjoyed in earlier years. Mr JRD Tata would have been overjoyed if he was in our midst today,” he said in the statement he tweeted.

The Tata Aviation Services was formed in the year 1932 and in 1948, a year after independence; it was incorporated as Air India. In 1953 the airlines was nationalized by the Nehru government.