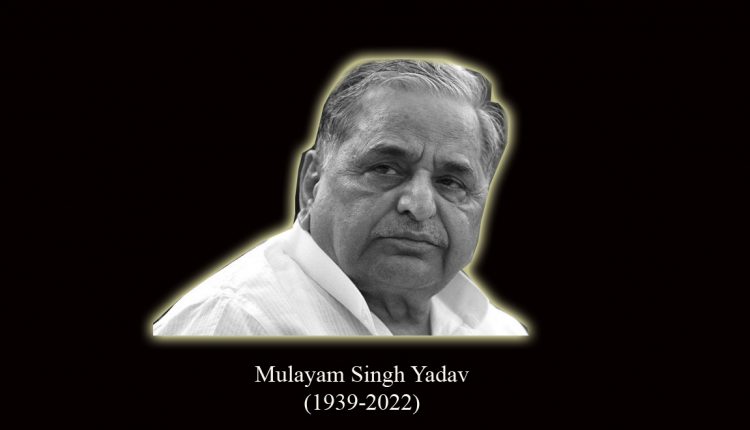 Gurugram: Mulayam Singh Yadav, the founder-patron of the Samajwadi Party (SP), passed away on Monday at Medanta Hospital in Gurugram. He was 82.

Mulayam, the former chief minister of Uttar Pradesh and former union minister, was on ventilator support after his health deteriorated on October 2.

Taking to its official Twitter handle, Samajwadi Party tweeted a statement by Mulayam Singh’s son and SP chief Akhilesh Yadav, “my father and everyone’s leader is no more.”

Several dignitaries and leaders cutting across party lines have expressed grief over the demise of the leader.

“The death of Shri Mulayam Singh Yadav is an irreparable loss to the country. The achievements of Mulayam Singh Yadav ji, who came from an ordinary environment, were extraordinary. ‘Dharti Putra’ Mulayam ji was a veteran leader associated with the land. He was respected by people of all parties. My deepest condolences to his family members and supporters!” twitted the president of India.

“Shri Mulayam Singh Yadav Ji was a remarkable personality. He was widely admired as a humble and grounded leader who was sensitive to people’s problems. He served people diligently and devoted his life towards popularising the ideals of Loknayak JP and Dr. Lohia. Mulayam Singh Yadav Ji distinguished himself in UP and national politics. He was a key soldier for democracy during the Emergency. As Defence Minister, he worked for a stronger India. His Parliamentary interventions were insightful and emphasised on furthering national interest” twitted Prime Minister Modi.