Unknown if the debris impacted land or water: US Space Command

New Delhi : Ending days of speculation, remnants of China’s biggest rocket Long March 5B landed in the Indian Ocean on Sunday, with the bulk of its components destroyed upon re-entry into the Earth’s atmosphere, according to Chinese state media citing China space Agency.

However, the US Space command has said that the remnants of the Rocket re-entered over the Arabian Peninsula in the early hours of Sunday.

“The remnants of China’s Long March 5B rocket reentered the earth’s atmosphere at 10:24 am Beijing time, the China Manned Space Engineering Office said on Sunday. Most of the debris from the rocket burned up during re-entry, said the office” reported China’s state owned Global Times. 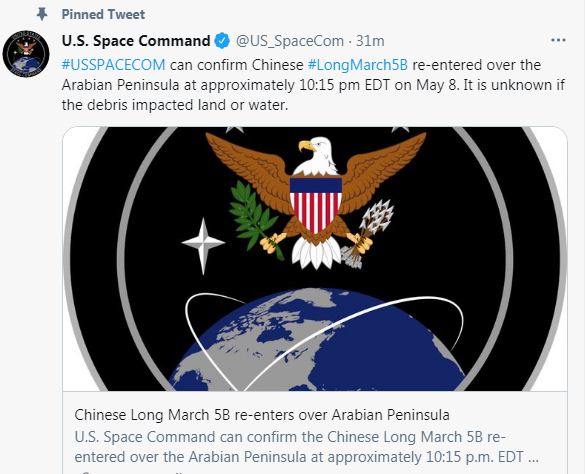 However, the US Space Command has said that the debris of the rocket re-entered the Arabian Peninsula at approximately 10.15 pm EDT (Eastern Daylight Time) on Saturday (about 7.45 am Indian Standard Time on Sunday).

“U.S. Space Command can confirm the Chinese Long March 5B re-entered over the Arabian Peninsula at approximately 10:15 p.m. EDT on May 8. It is unknown if the debris impacted land or water” U.S. Space Command twitted.

Meanwhile, according to media reports the debris was fallen in the Indian Ocean near the Island Country Maldaves in the South-West of India.

Hero Motocorp extends closure of its plants till May 16