Internet cannot be a monopoly of few: India at the G-20 Ministerial Meeting 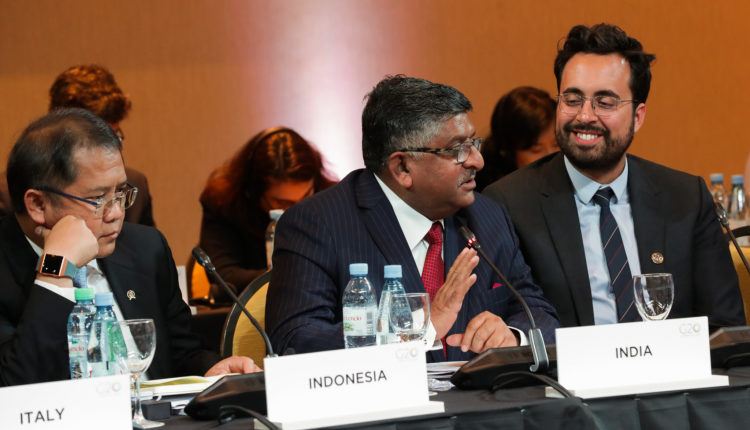 NewDelhi : With a view to protect individual privacy and data protection India had already put in place stringent measures backed by laws passed by the parliament. Privacy cannot prohibit innovation nor can privacy become the shield for the corrupt or terrorists. We need data to improve business but the data must be anonymous, objective, and taken with consent, said Minister for Electronics and IT & Law and Justice, Ravi Shankar Prasad.

Speaking at the G-20 Digital Economy Ministerial meeting held at Salta, in the north-west of Argentina, the minister stressed that India had taken a serious note of reported misuse of social media platform data. Such Platforms will never be allowed to abuse our election process for extraneous means, he added. He said that the purity of the democratic process should never be compromised and that India will take all required steps to deter and punish those who seek to vitiate this process.

At the meeting, G20 ministers and senior officials issued a declaration that reflects the G20’s commitment towards promoting “policies and actions that catalyze digital transformations. The Digital Economy Ministerial Meeting, held on 23-24 August, was attended by 33 heads of delegation- Ministers, senior officials and representatives from invited countries and international organizations, like EU, UNCTAD, ITU etc.

Minister Prasad said that India believed in internet access for all, adding that the Internet is one of the finest creations of the human mind, but it cannot be the monopoly of a few. He also stated that while Cyber-space is truly global, it must be linked with local ideas, local culture and local views. He said that the largest and most dynamic markets for digital services are in Asia, Latin America and Africa with India having one of the largest foot-print of several popular social media and other digital platforms. It is only fair and just that the revenue and profit generated from these platforms be equitably reinvested in the largest markets to create more infrastructures and generate more job opportunities for the people there, he added.

The G20 member nations agreed to promote policies that will contribute to bridging all forms of digital divide, with special attention to the digital gender divide. The countries agreed to promote digital government and digital infrastructure, strengthen the digital skills of the workforce, deepen the analysis towards digital economy measurement, and to share experiences and lesson learned”.