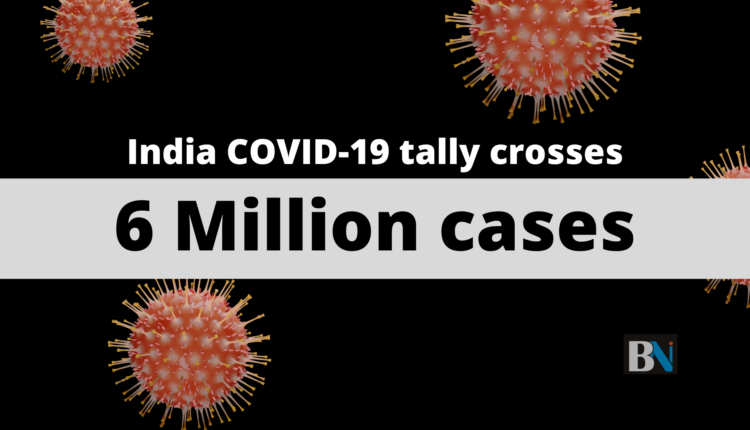 Bhubaneswar: India’s COVID-19 tally crossed 60 lakh mark on Monday with a daily spike of 82 thousand positive cases and over 1000 deaths.

The USA has remained the worst affected country with 7.1 million cases followed by India, However, the gap between the USA and India is narrowing and it is estimated that India may overtake the USA in the next 10 days.

As per the latest data released by the Ministry of Health & Family Welfare, India’s total cases rose to 6074702 by Monday morning. The total number includes 962640 active cases and 95542 deaths while   5016520 people have been recovered from the viral infection.

The country reported record 82170 new cases and 1039 deaths in the last 24 hours. With this India’s mortality rate has declined to 1.5 per cent while the recovery rate has improved further to 82.5 per cent.

Meanwhile, as many as 7,09,394  samples were tested in the last 24 hours out of which nearly 82 thousand samples were found to be positive. With this, the country has tested total 7,19,67,230 samples till the 27th of September with a positivity rate of 8.4 per cent, the Indian Council of Medical Research (ICMR) said.

The Coronavirus has continued to wreak havoc in the world as total cases has climbed to 32.9 million including more than 1 million deaths as on Monday morning. The United States of America has remained the worst affected country in the world with 7.1 million cases and 2 lakh deaths. USA is followed by India and Brazil with 6 million and 4.7 million cases respectively.

However, in terms of deaths, the USA has remained in the top position followed by Brazil with 141,741 deaths. (source: John Hopkins University, USA)