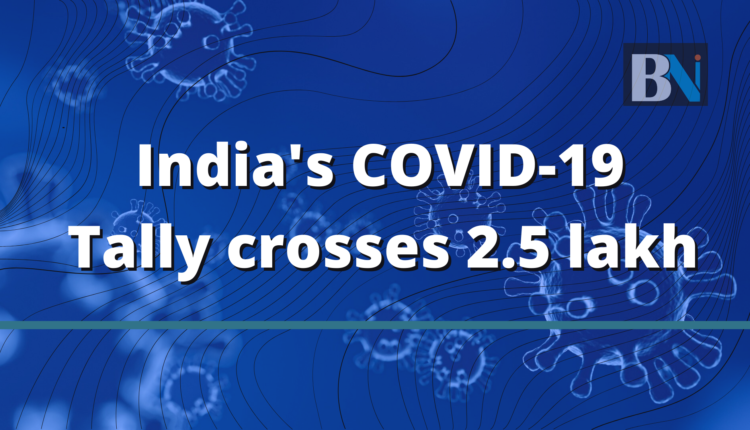 Bhubaneswar: Five days after crossing the 2 lakh mark, India’s COVID-19 tally on Sunday crossed the 2.5 lakh mark and with the current rate of growth the tally is likely to cross the 3 lakh mark by 12th of June.

As per the latest data released by the Ministry of Health & Family welfare, India’s total cases rose to 256611 by Saturday morning. The total number includes 125381 active cases and 7135 deaths while 124095 people have been cured and discharged from hospitals.

India has reported as many as 9883 new confirmed cases and 206deaths in the last 24 hours. Meanwhile, as many as 4803 persons have cured since yesterday taking India’s recovery rate to  48 per cent while death rate remain unchanged at 2.7 per cent.

Meanwhile, as many as 108048 samples were tested in the last 24 hours out of which 9883 samples were found to be positive. With this, the country has tested total 4774434 samples till 8th  of June with a positivity rate of 5.37 per cent, the Indian Council of Medical Research (ICMR) said.

The Coronavirus has continued to wreak havoc in the world as total cases have crossed the 7 million mark including more than 4 lakh deaths as on Monday. The United States has remained the worst affected country in the world with 1.9 million cases and 1.10 lakh deaths. The USA is followed by Brazil with 6.91 lakh cases and 36455 deaths and Russia with 4.67 lakh confirmed cases and 5851 deaths