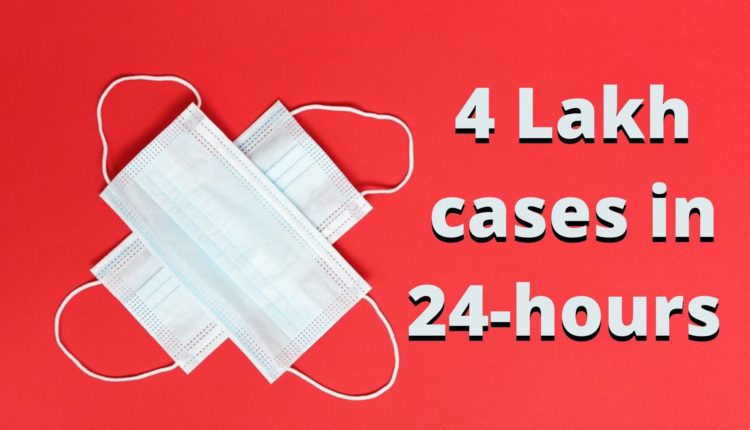 New Delhi: India’s daily COVID-19 cases reached to a new peak as the country reported over 4 lakh new cases and 3523 deaths in the last 24 hours.

According to the data released by the Union health Ministry the country has reported 401,993 new cases in the last 24 hours at a positivity rate of 20.6 per cent. With this, India’s COVID-19 tally has increased to 1.91 crore which includes 32,68,710 active cases.

On the other hand, nearly 3 lakh people have recovered from the infection which takes the total recoveries to 1.56 crore.

Amid massive shortage of vaccines, India on Saturday widened the vaccination programme to include those above 18 years of age. However, only six states have reportedly started the 3rd phase vaccination while bigger states like Maharastra, Gujarat, Kerala, Punjab,Uttarakhand, Andhra Pradesh, Odisha have said that they do not have enough vaccines to launch the 3rd phase.

“We had planned a big event for today but we received only 3 lakh doses. Out of that 20,000 have been given to Pune district. Today we don’t have vaccines to inoculate people aged 45 yrs & above. Hence vaccination centres in Pune dist are closed for next 2 days” said Maharashtra Deputy Chief Minister Ajit Powar.