History created at Sabarimala, two women in their 40s, enter the Shrine 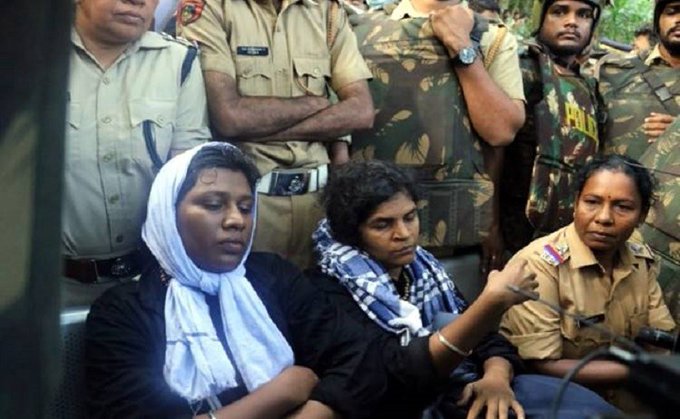 BiznextIndia : Almost 3 months after the Supreme Court allowed women of all ages to enter the Sabarimala Shrine, two women in their 40s today made history by entering into the Garbhagriha or the innermost sanctum and made Darshan of Lord Aiyappa Swamy.  A top source in the Kerala police said that the two women, Bindu and Kanaka Durga, both below 50 years of age, entered the temple before 4 in the morning on Wednesday.

Kerala chief Minister P.Vijayan has confirmed the development and has expressed his happiness.

The video shows the two women dressed in black clothes at the Sannidhanam. Top sources in the Kerala police said that policemen in mufti had accompanied the two women. The women, according to police sources, entered Sannidhanam through the north entrance of the temple. It is, however, not clear how and when they reached Pamba and started the ascent to the shrine.

Have the Communists desecrated Sabarimala shrine by facilitating entry of women of restricted age group into the temple? Devastating, if true.

Meanwhile, the BJP has criticized the Kerala Government for desecrating the Shrine and playing with Hindu sentiment.
“Have the Communists desecrated Sabarimala shrine by facilitating entry of women of restricted age group into the temple? Devastating, if true. “ BJP IT Cell head Amit Malavya has twitted.