Failure of the internal control system is the prime reason for growing numbers of Bank fraud : Experts 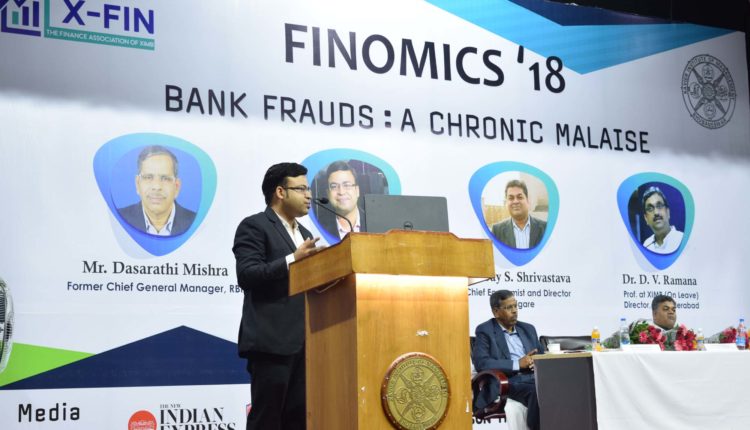 Bhubaneswar: Bank frauds are different from other kind of frauds as it affects a large number of small savers and derail the economic activity. Failure of the internal control system and delinquent behavior by the banking professionals are the major reasons why frauds are continuously growing, opined experts during the business conclave Finomics, organized by X-Fin the Finance Association of XIMB.

“Bank frauds are different from the rest of the frauds happening in other sectors, primarily because bank frauds affect a large number of small savers, impact the whole gamut of economic activity, thus slowing down the growth” and unlike other sectors, here “the bailouts happen with the tax-payers money” and are not compensated by any other source” said Jay Shankar Shrivastav, Chief Economist and Director, Religare.

He added that operations risk is the root cause of bank frauds. He also formulated a number of solutions as a measure to control bank frauds such as maintaining a “Super-regulatory body” since the Reserve Bank of India (RBI) is over-burdened with responsibilities, establishing dedicated verticals within banks to monitor frauds and ensuring safety and security of whistle-blowers.

“Failure of the internal control system and delinquent behavior by the banking professionals” is a major reason why frauds are continuously growing and plaguing the economy” said  Dasarathi Mishra , Former Chief General Manager, RBI.

Mr. Satya S. Mahapatra, Senior Vice President, Barclays Risk, and Analytics dived into the global situation on bank frauds and said that “frauds are a global phenomenon”. He analyzed many case studies and the Fraud Triangle to understand the rationality behind the behavior of people engaging in such activity. He also portrayed the Adaptive Security Architecture that can be used to prevent fraudulent activities and added that there are 5 layers of fraud prevention, among which the most important being “continuously updating and refining models”.

Meanwhile, Dr. D.V. Ramana, director of IMT Hyderabad took a slightly different approach to the topic by stating that there is no such phenomenon as Bank fraud in particular. He explained NPAs (non-performing assets), fraud and twin balance sheets are interlinked. “NPA is a visible manifestation of fraud,” he said, whilst explaining on how financial institutions are concerned of NPAs due to the effect it will have on twin balance sheets. He explained that the main concerns in the area of fraud are not bank frauds but corporate frauds. “Bank’s problems are not valuations but values”, he said in lieu of this topic. He concluded by stressing on the importance of operational optimization; “Neither education nor technology can fix the operational problems”, he said.