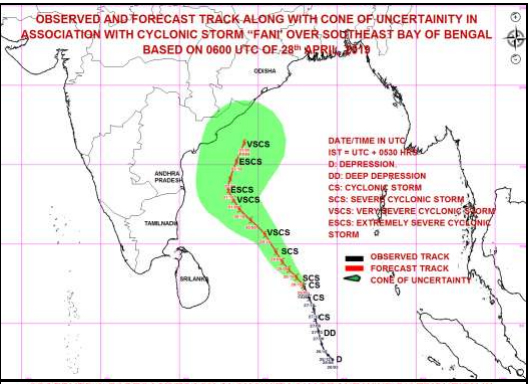 “The Cyclonic Storm ‘FANI’ (pronounced as ‘FONI’) over southeast Bay of Bengal & neighbourhood moved northwestwards with a speed of about 10 kmph in last six hours and lay centred at 1430 hrs IST of 28 th April, 2019 near latitude 7.7°N and longitude 87.5°E over south-east Bay of Bengal & neighbourhood, about 690 km east-southeast of Trincomalee (Sri Lanka), 990 km southeast of Chennai (Tamil Nadu) and 1170 km south-southeast of Machilipatnam (Andhra Pradesh). It is very likely to intensify into a Severe Cyclonic Storm during next 06 hours and into a Very Severe Cyclonic Storm during subsequent 24 hours. It is very likely to move northwestwards till 01st May evening and thereafter recurve north-north-eastwards gradually” IMD said in its special bulletin on the cyclone.

Global Steel production up 5% in March on robust Chinese figures