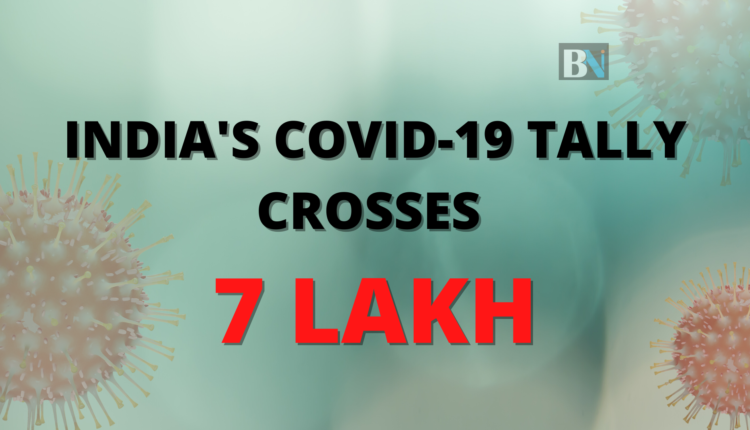 Bhubaneswar: Five days after crossing the 6 lakh-mark, India’s COVID-19 tally crossed the 7 lakh mark on Tuesday. The death toll has also crossed 20 thousand-mark while the recovery rate has improved to 61.1 per cent.

As per the latest data released by the Ministry of Health & Family Welfare, India’s total cases rose to 719665 by Tuesday morning. The total number includes 259557 active cases and 20160 deaths while 439948 people have been recovered from the viral infection.

As many as 22252 new cases and 467 deaths have been reported in the last 24 hours. With this India’s mortality rate has remained stable at 2.8 per cent while the recovery rate has improved further to 61.1 per cent.

Maharastra has remained the worst affected state in the country as its total number of confirmed cases has crossed 211987 including 87699 active cases and 9026 deaths. Maharastra is followed by Tamilnadu and Delhi with 114978  and 100823 confirmed cases respectively.

The Coronavirus has continued to wreak havoc in the world as total number of cases has climbed to 11.59 million including more than 5.37 lakh deaths as on Tuesday morning. The United States of America has remained the worst affected country in the world with 2.9 million cases and 1.30 lakh deaths. The USA is followed by Brazil with 1.6 million cases and 65487 deaths and India with over 7 lakh cases and more than 20 thousand deaths.

Bank of Maharastra cuts MCLR by 20 basis points for July