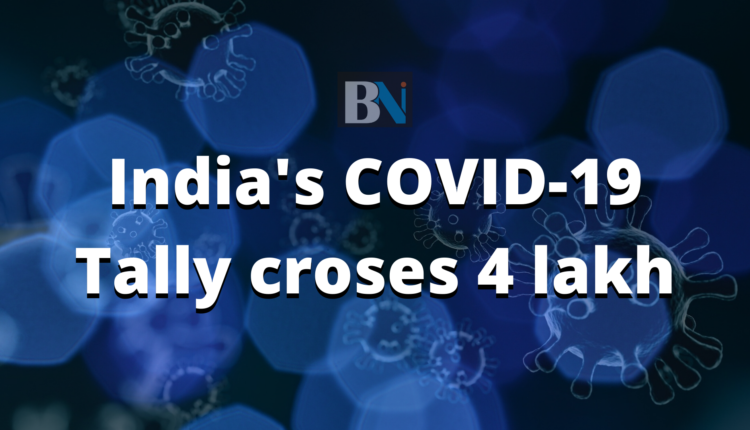 Bhubaneswar: A week after crossing the 3 lakh-mark, India’s COVID-19 tally on Sunday crossed the 4 lakh mark including over 13000 fatalities.

As per the latest data released by the Ministry of Health & Family Welfare, India added 15413 new cases in the last 24 hours taking the tally to 4,10,461 by Sunday morning. The total number includes 169451 active cases and 13254 deaths while 227756 people have been recovered from the viral infection.

While India took 115 days to touch its first one lakh mark, the second one lakh came only in 15 days and the 3rd one lakh in 10 days. But the 4th one lakh came in just 8 days.

With record 13925 recoveries India’s recovery rate has surpassed55 per cent while 306 patients died in the last 24 hours and the death rate has remained unchanged at 3.2 per cent.

Maharastra has remained the worst affected state in the country as its total number of confirmed cases has climbed to 128205 including 58068 active cases and 59848 deaths. Maharastra is followed by Tamilnadu and Delhi with 56845 and 56746 confirmed cases.

Meanwhile, as many as 190730 samples were tested in the last 24 hours out of which over 15 thousand samples were found to be positive. With this, the country has tested total 68,07,226 samples till 21th of June with a positivity rate of 6.2 per cent, the Indian Council of Medical Research (ICMR) said.