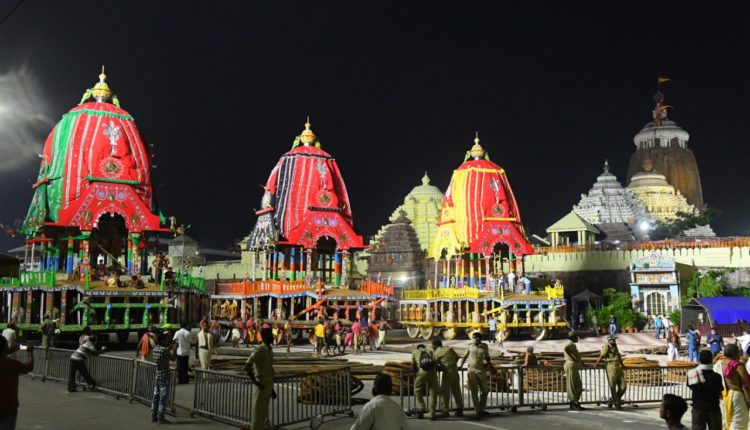 Bhubaneswar : The Supreme Court on Monday gave a green signal to RathYatra at Jagannath Temple, Puri. The apex court gave its permission after the state government informed that it is ready to conduct the annual festival without devotees and with adhering the COVID – 19 guidelines.

1) All entry points into the City of Puri, i.e., airports, railway stations, bus stands, etc., shall be closed during the period of Rath Yatra festival. The State Government shall impose a curfew in the City of Puri on all the days and during all the time when Rath Yatra chariots are taken in procession.

2) The State Government may also impose curfew in the city of Puri on such other days and during such time as deemed necessary. During the period of curfew no one would be allowed to come out of their houses or their places of residence, such as, hotels, lodging houses, etc. To start with, the curfew shall begin tonight at 8 P.M.

3) Each Rath, i.e.., Chariot, shall be pulled by not more than 500 persons. Each of those 500 persons shall be tested for the Coronavirus. They shall be permitted to pull the chariot only if they have been found negative. The number 500 shall include officials and police personnel.

4) There shall be an interval of one hour between two chariots.

5) Each of those who is engaged in pulling the chariot shall maintain social distancing before, during and after the Rath Yatra.

6) We direct that only such persons shall be associated with the rituals who have been found to have tested negative and shall maintain social distancing.

7) The primary responsibility for conducting the Rath Yatra in accordance with the conditions and other norms shall be that of the Committee in-charge of Puri Jagannath Temple Administration. Each member of the Committee shall be responsible for due compliance with the conditions imposed by this Court and the general directions which govern ensuring of public health issued by the Union Government. In addition, the officers designated by the State Government for conduct of the Rath Yatra shall be responsible likewise.

8) The rituals and the Rath Yatra shall be freely covered by the visual media. The State Government shall allow TV cameras to be installed at such places as may be found necessary by the TV crew.

9) The bare minimum number of people shall be allowed by the Committee to participate in the rituals and in the Rath Yatra. We take a note of the fact that the State of Orissa has a good record of having controlled the pandemic with a very little loss of life. We see no reason why the same attitude of care and caution should not be applied to the Rath Yatra.

11) The State Government shall maintain a record containing details of all those who have been allowed to participate in the Rath Yatra or the rituals connected therewith along with details of their medical conditions after testing.