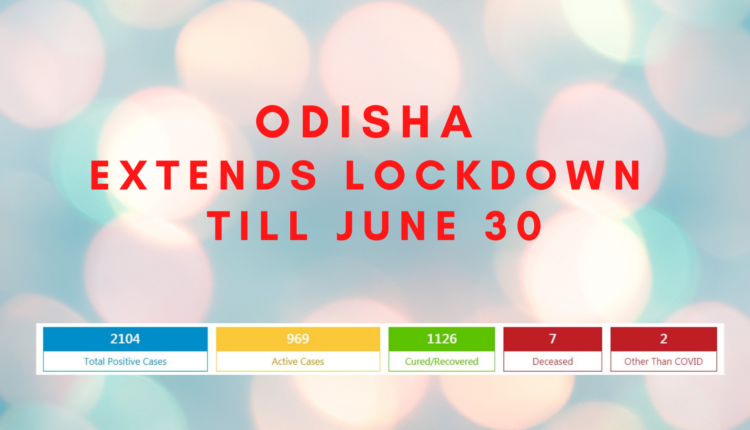 Bhubaneswar: Keeping in view the sharp rise in new cases, the Odisha government on Monday extended the lockdown period till 30th June including complete shutdown in 11 districts on Saturday and Sunday.

Announcing this Chief Secretary Asit Tripathy said, the month of June will be very crucial for the state as cases will increase sharply in this month in view of the return of about 4.26 lakh migrants to the state.

As per the new guidelines announced by the state, the lockdown restrictions will remain effective till 30th June.  While no religious place will be allowed to open till June 30, all the shopping malls, gyms, Cinema Halls will remain closed. The state has also hiked penalty to spitting in public from Rs.200 to Rs.500. The government has also announced complete shutdown in 11 districts (9 coastal districts and Nayagarh and Bolangir) on Saturday and Sunday.

The government has also announced the closure of schools and Collages till July 30.

Odisha on Monday reported as many as 156 new confirmed cases taking the tally beyond the 2000 mark. This is the highest ever addition of positive cases in a single day. With the addition of 156 fresh cases, Odisha’s total number of cases has climbed to 2104 which includes 969 active cases and 7 fatalities while 1126 patients have recovered from the viral infection.

Out of the 156 new cases, 50 cases are from the Kendrapara district while 20 cases have been reported from Cuttack district while 17 from Ganjam district and 14 from Jagatsinghpur.