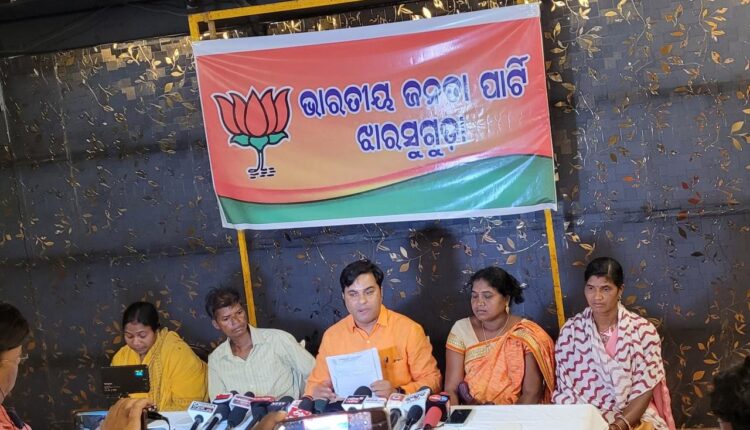 Jharsuguda : Odisha BJP Secretary Tankadhar Tripathy on Monday alleged that  JSW BPSL have not yet provided any compensation to the four contractual labourers who had sustained burn injuries while performing their duty in the plant on 11th March 2022.

Addressing a Press Meet, Tripathy alleged that, on 11th March, four labourers namely Karan Oram, Nilamani Oram, Anjan Oram and Ashok Dhurua, all residents of Titeimal Village under Bhalaida Panchayat of Jharsuguda District had gone to work at the JSW BPSL. On the same night, there was a blast in the plant, which inflicted burn injuries of varying degrees on the four workers. While one labourer had received 80 percent injury, another suffered 30 percent and two others had around 10 percent injury each. However, they were given threats and advised not to file any FIR on the incident. After receiving primary  treatment at the plant dispensary, two of them were sent to the Ispat General Hospital, Rourkela and  two others to the Veer Surendra Sai Institute of Medical Sciences and Research (VIMSAR), Burla. In the process, whatever little savings the poor workers had with them, got exhausted in their treatment. They are poor labourers and they have no money left with them.  The contractors who engaged them in the plant have done nothing for them.  Even after a month of this unfortunate incident, the District administration has not taken any action. No FIR has yet been lodged with the police.   I demand that all the injured workers be paid  a compensation of Rs 10 lakhs each along with entire treatment cost. I also demand that an FIR be lodged with the local police and necessary action be taken against the erring Contractor who is responsible for the miserable plight of poor labourers. If no steps are taken within seven days, I shall be compelled to take the matter to the National Human Rights Commission and the SC& ST Commission.”