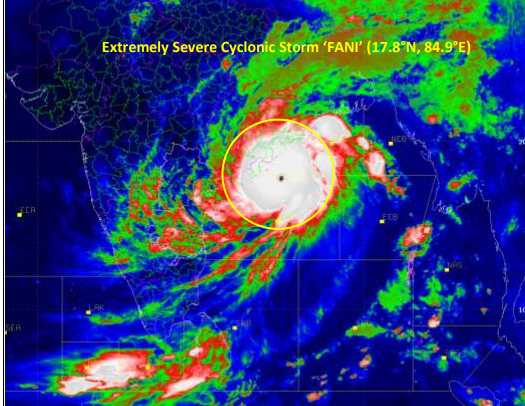 Bhubaneswar: The  extremely severe cyclonic storm FANI over west-central Bay of Bengal (BoB) has moved north-northeastwards and lay centered at  about 240 km south-southwest of Puri (Odisha), 160 km east-southeast of Vishakhapatnam (Andhra Pradesh) and 540 km south- southwest of Digha (West Bengal). It is very likely to move north-northeastwards and make landfall near Puri during forenoon  ( between 8am to 10 am)of 3rd May, with maximum sustained wind speed of 170-180 kmph gusting to 200 kmph.

According to IMD bulletine, Landfall process is very likely to continue till noon/afternoon of tomorrow the 3rd May. After the landfall the system is very likely to continue to move north-northeastwards, weaken gradually and enter into West Bengal as a Severe Cyclonic Storm with the wind speed of 90-100 kmph gusting to 115 kmph. It is very likely to move further north- northeastwards and emerge into Bangladesh on 4thApril evening as a Cyclonic Storm with wind speed 60-70 kmph gusting to 80 kmph. The cyclone is being tracked by Doppler Weather Radars Vishakhapatnam & Machilipatnam.

India may launch its Moon Mission during July 9-16