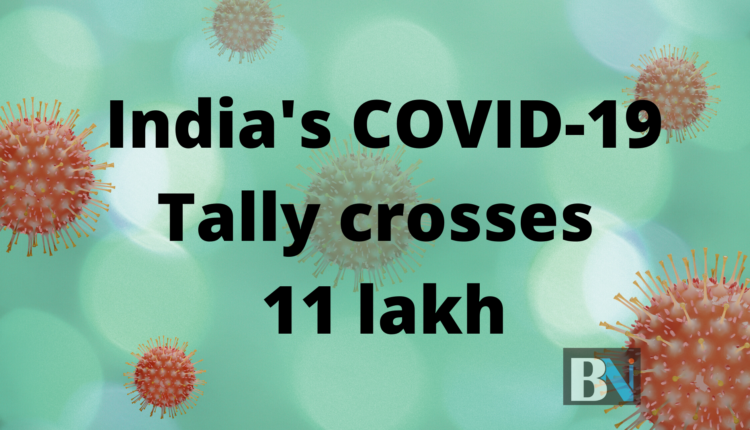 Bhubaneswar: Three-days after crossing the one million mark, India’s COVID-19 tally added another one lakh cases to cross the 1.1 million-mark including over 27 thousand deaths.

As per the latest data released by the Ministry of Health & Family Welfare, India’s total cases rose to 1118043 by Monday morning. The total number includes 390459 active cases and 27497 deaths while 700087 people have been recovered from the viral infection.

The country reported record 40425 new cases and 681 deaths in the last 24 hours. With this India’s mortality rate has remained stable at 2.4 per cent while the recovery rate has improved further to 63 per cent.

Maharastra has remained the worst affected state in the country as its total number of confirmed cases has crossed 3 lakh including 129032 active cases and 11854 deaths. Maharastra is followed by Tamilnadu and Delhi and Tamilnadu with 170693 and 122793 confirmed cases.

The Coronavirus has continued to wreak havoc in the world as total cases have climbed to 14.45 million including more than 6 lakh deaths as on Monday morning, the data released by US-based John Hopkins University said. The United States of America has remained the worst affected country in the world with 3.7 million cases and 1.4 lakh deaths. The USA is followed by Brazil with 2 million cases and 79488 deaths. India has remained at the 3rd spot in the list of worst-affected countries in the world.

Vodafone Idea pays another Rs.1000 crore as AGR due