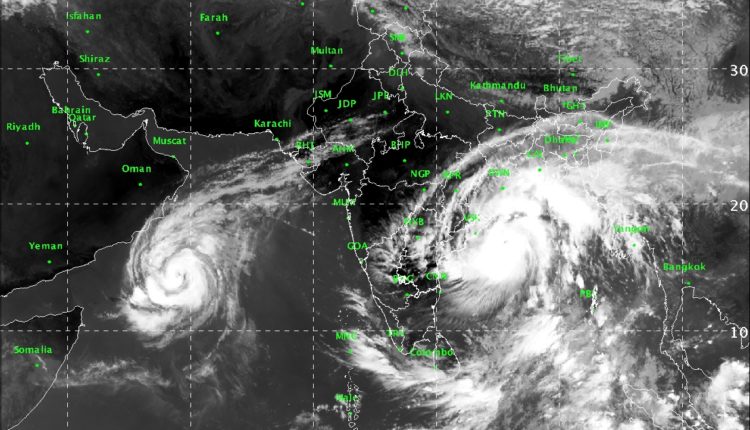 Bhubaneswar: Cyclonic storm ‘Titli’ over the west-central Bay of Bengal  has intensified into a very severe cyclonic storm, as per the latest cyclone bulletin by the Indian Mete India Meteorological Department (IMD) issued at 11 hrs. As per the bulletin the Cylonic storm has moved northwestwards with a speed of about 10 kmph during the past six hours and lay centered over the west-central Bay of Bengal, about 320 km south-south-east of Gopalpur in Odisha and 300 km southeast of Kalingapatnam in Andhra Pradesh.

“ The Severe Cyclonic Storm ‘TITLI’ over westcentral Bay of Bengal moved northwards with a speed of about 14 kmph during past 06 hours, and lay cantered at 0830 hrs IST of today, the 10th October 2018 over Westcentral Bay of Bengal near latitude 16.5°N and longitude 85.8°E, about 320 km south-southeast of Gopalpur (Odisha) and 270 km southeast of Kalingapatnam (Andhra Pradesh). It is very likely to intensify further into a Very Severe Cyclonic Storm during next three hours. It is very likely to move northnorthwestwards and cross Odisha & adjoining north Andhra Pradesh coasts between Gopalpur & Kalingapatnam around morning of 11th October. Thereafter, it is very likely to re-curve northeastwards, move towards Gangetic West Bengal across Odisha and weaken gradually” the IMD report said.

The IMD report has also warned that the Wind Speed to increase to 165 kilometers per hour. “It is very likely to increase gradually becoming 140-150 kmph gusting to 165 kmph from today, the 10th October 2018 night onwards along & off south Odisha & adjoining districts of north Andhra Pradesh coasts and 70-80 kmph gusting to 90 kmph along & off north Odisha and remaining districts of north Andhra Pradesh coasts” IMD said.