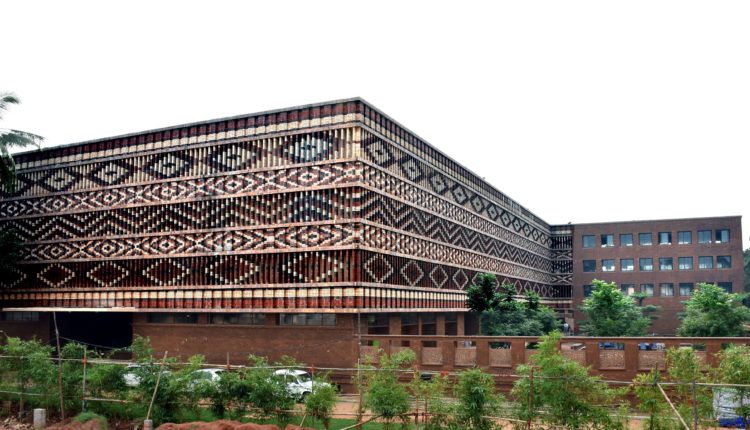 Bhubaneswar:  The famed ‘Krishi Bhawan’ in Bhubaneswar has added another feather in its cap as the sustainable architecture building has been shortlisted for coveted ‘dezeen’ awards 2020, given by the world’s influential architecture and design magazine ‘dezeen’.

The mesmerizing architectural wonder designed by Delhi based Studio Lotus, has been nominated for the prestigious award in the ‘civic building’ sub-category under the ‘Architecture’ category.

Admiring the building the digital magazine has written, “the complex houses administrative offices for the Department of Agriculture & Farmers’ Empowerment around courtyards filled with ponds and trees. The brickwork elements that wrap the upper floor create a pattern designed to emulate Odisha Ikat, a traditional dyeing technique from the eponymous Indian state. Studio Lotus recreated the patterns with bricks using three different colours of clay sourced from the surrounding area. The perforations in the facade help to naturally cool the building”.

“Bas reliefs carved into the laterite on the complex’s public plaza illustrate rice paddies in the style of Odisha Pattachitra scroll paintings, a traditional, cloth-based scroll painting. Dhokra, a type of metalwork perfected in India over 4,000 years, appears on screens along the building’s corridors and the light fixtures on columns” it added.

The building has already been featured in several other prestigious magazines like Forbes, archdaily, architecturalrecord. Last year it was shortlisted in the coveted ‘world architecture festival’.