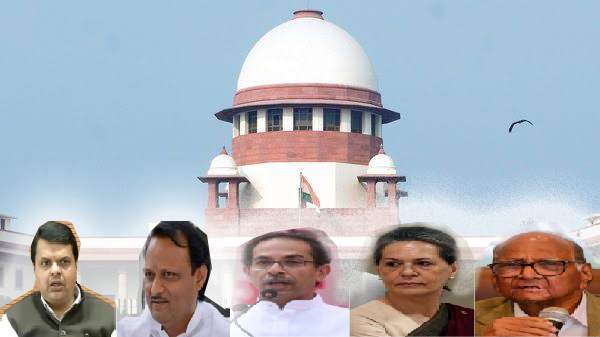 New Delhi: The Supreme Court has reserved its order on the Shiv Sena-NCP-Congress’s plea for an urgent floor test in Maharashtra till Tuesday. A bench comprising of Justices N V Ramana, Ashok Bhushan and Sanjiv Khanna adjourned the hearing for 10.30 am tomorrow.

During the hearing the Bench took note of the key letters of Governor Bhagat Singh Koshyari inviting BJP’s Devendra Fadnavis to form the government, and of the BJP leader claiming the support of the required number of MLAs to stake claim submitted by the Centre. Yesterday, during the special Sunday hearing the court had asked for the key correspondences between Devendra Fadnabis and the Governor.

Appearing for the secretary of Maharastra Governor, Solicitor General Tusar Meheta read out both the letters between Devendra Fadnabis to the Governor and the Governor’s letter to Fadnabis. The SG said that as the chief of the NCP legislative party, Ajit pawar has given support to BJP on behalf of the NCP 54 MLAs.

Appearing for Ajit Pawar, Senior Advocate Maninder Singh said there was nothing to the contrary to show that Pawar was not the NCP leader as of November 22.

On the other hand, on behalf of Shiv Sena senior Advcate Kapil Sibal questioned   “When the Governor waited for so many days, what was the emergency that required revocation of President’s Rule at 5.47 in the morning and installing a Govt at 8 am?”