New Delhi : The nationwide lockdown has severely impacted the Industrial output of the country as the growth rate of Eight core Industries for April has declined by 38 per cent, government data shows.

“The growth rate of Index of Eight Core Industries for April 2020 declined by 38.1% (provisional) compared to a decline of 9 per cent (provisional) previous month of March 2020.In view of nationwide lockdown during April 2020 due to COVID-19 pandemic, various industries viz. Coal, Cement, Steel, Natural Gas, Refinery, Crude Oil etc experienced a substantial loss of production” said the data released by the Department for Promotion of Industry and Internal Trade, Ministry of Commerce.

Meanwhile, India’s gross domestic product (GDP) grew 3.1 percent during the fourth quarter of 2019-20 financial year against 5.8 per cent in the Q4 of FY19. 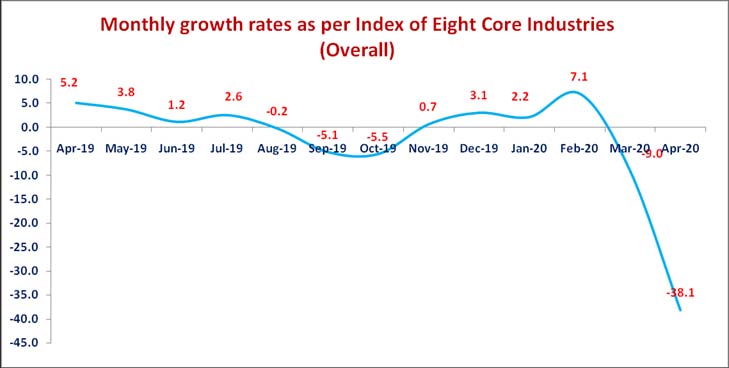 The summary of the Index of Eight Core Industries is given below :