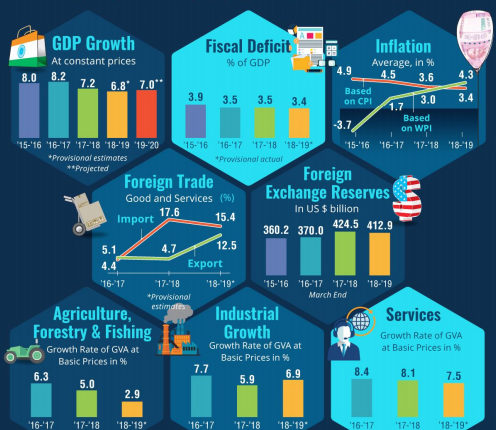 New Delhi  :  A day before thepresentation of General Budget, the Finance Minister Nirmala Sitharaman today presented the Economic Survey for the 2018-19 Fiscal.

The Economic Survey has projected the real GDP growth for the year 2019-20 at 7 per cent, on the back of anticipated pickup in the growth of investment and acceleration in the growth of consumption. However, the country needs to grow at 8% to become a $ 5 Trillion economy.

The Survey clearly stated that the year 2019-20 has delivered a huge political mandate for the government, which augurs well for the prospects of high economic growth. The April, 2019 Report of the World Economic Outlook (WEO) of International Monetary Fund (IMF) has projected India’s GDP to grow even higher at 7.3 percent in 2019. This is despite the Report projecting a decline in growth of world output and that of Emerging Market and Developing Economies (EMDEs) by 0.3 and 0.1 percentage points respectively.

Govt to lease out Ahmedabad, Lucknow and Mangaluru airports to Adani