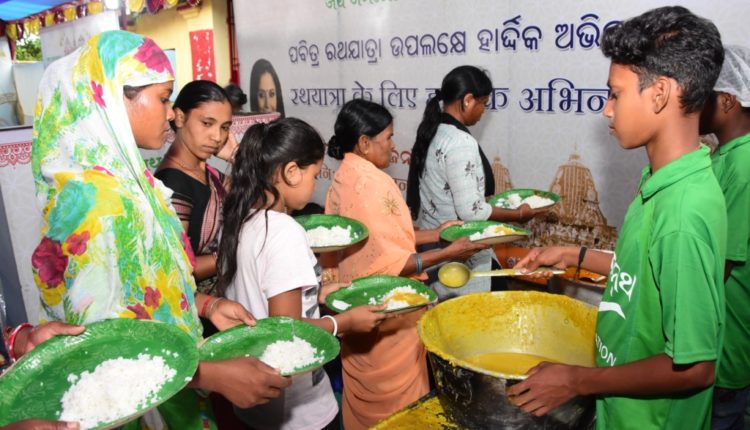 Bhubaneswar: JSPL Foundation, the CSR arm of Jindal Steel and Power Limited (JSPL), served fresh cooked pure veg meals, without onion and garlic to more than 50000 devotees during the Rath Yatra at Puri. The free food service was provided at a special camp, organised in coordination with the district administration, near Puri Railway Station.

Like previous years, the distribution of staple food was started on Netrotsav Evening on 13th July 2018 and continued till late evening of Rath Yatra on 14th July 2018. In the second phase, the service was continued on Bahuda Yatra (return car festival) and Sunabesha (Lord on Gold Attire) days. Devotees were served rice, dalma (medley of lentil and vegetables) and khatta (condiment made from raw mangoes).

Besides, the Foundation, in coordination with the Rural Water Supply and Sanitation (RWSS), Puri, distributed 7000 packets of Glucose powder among devotees at Badadanda during Rath Yatra.

Lakhs of devotees availed the facility of cold drinking water from a refrigerated mobile drinking water tanker of 1000 litre capacity engaged by the Foundation throughout 10 days of Rath Yatra at Puri. Charged multiple times, the vehicle provided average 5000 litres of chilled drinking water every day during the festival.