From a migrant worker to a Dhokra artist: the transformative story of Butra Kansari 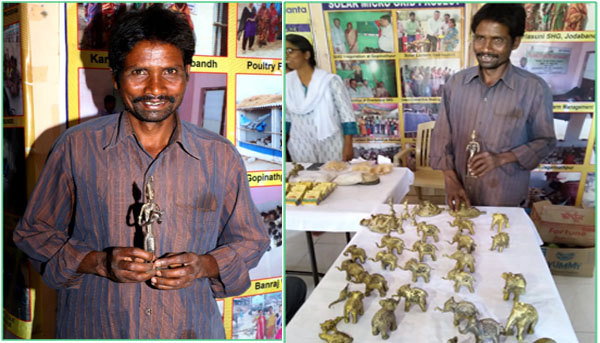 Bhubaneswar : Butra Kansari, 38, long aspired to purchase a motorcycle since the time he saw one in Kerala where he worked as a wage labourer. Nobody in his native village ever owned a motorcycle. A year back, it would have been impossible for the people of Kankeri village, a non-descript habitat situated in the remote parts of Kalahandi district in Odisha which is Butra’s home, to even dream of owning one. But today, Butra actually owns one that he recently bought with the money he earned as a Dhokra artisan. He is the first person in the village to own a motorcycle. And Vedanta believes that this is first of many, many more.

Kankeri is one of the poorest villages of India. According to Census 2011, there are approximately 3,800 people living in this village. Cut off from any form of civilization and steeped in abject poverty, the villagers have originally depended on agriculture to meet their livelihood. But in today’s progressively modernizing world, it is difficult to farm up a proper living without the right machineries and contemporary technologies. Affording the costly hardware was a difficult proposition and the villagers were forced to look for menial labour outside their home. The opportunity to earn a wage in the southern parts of India, specifically Kerala, compelled them to leave a few years back. But the uncertainty of it all was too much to endure.

It was around this time that Vedanta Aluminium’s team, who was working with the community around the Lanjigarh plant for their development, came to learn of Dhokra art – an ancient technique of wax and metal casting that originated in Odisha and Bengal from the community of traditional metalsmiths called ‘Dhokra Damar’ – and of Kankeri village where the almost extinct craft holds on to a sliver of life.

The team started travelling daily to the village, 30 kilometres from the plant, to sit with the artisan community and evaluate opportunities with them. The idea was to revive the form and merge it with mainstream art, and enable the community to earn a sustainable livelihood out of it.

“These people do not want to leave their village, their home, and travel to far-off places to earn a living. They were doing it out of necessity, not choice. Farming was not paying off. So when we shared the idea of making a living from the craft which they have acquired from their forefathers and a skill they honed through generations of practice, they were excited. We received their support from the very first day”, said Mr Rakesh Mohan, COO – Vedanta Aluminium, Lanjigarh unit.

In 2018, Vedanta started working full throttle. For, time was short and without any discernible, tangible benefit, their efforts risked losing interest among these people. First, the company got trainers from Mayurbhanj, Odisha, who have already made a mark and work regularly with the government. At company’s expense, a trainer would put up training facility in the village for 4 months at a stretch, teaching the artisans daily, helping them develop their skill and hone it to a professional quality that would enable them to present their works in national forums and exhibitions. The company got them new tools necessary for artwork and also ensured there was no dearth of supply of essential raw materials like bee wax and brass.

As efforts started bearing fruit, Vedanta moved to the next strategy – help the artisan community create a raw material bank that would enable them to work seamlessly; open a Self Help Group bank account to provide adequate financial support; assist each of the 35 households to open a bank account where they can keep their hard-earned money and earn an interest on their deposit; organize an artisan’s card in collaboration with the Government of Odisha that would give the artisans of Kankeri village public recognition and also access to government-held exhibitions to participate, demonstrate and commercialise their works.

Today, the efforts have handsomely paid off as the artisan community is currently sitting on an order pipeline well over Rs. 70,000. Four to five artists have reached a professional level and are ready to take off independently. Two artisans have already received Rs. 50,000 each from the government’s Mudra loan scheme to bankroll their artwork.

In the last one year, Vedanta has invested Rs 14 lakhs into this initiative. A large chunk of this money went into creating accessibility to the village which is situated in the foothills of the Niyamgiri hills and had no roads or telecommunication towers.

“When we first started the initiative, there were considerable challenges before us. There was no communication network, no road for commercial vehicles to ply. We had to create all these. Without roads, how can these artists market their craft? But the main challenge was to make them find faith in the value of their art form. For years, dire needs have made them drift away from the traditional art form”, said Mr Rakesh Mohan.

They have even intervened to provide solar-generated electricity in the village where utility poles do not exist and government is yet to figure out a way to bring lights to these houses. The team said they are looking to increase the solar capacity, so as to feed enough electricity that will be able to power the large cleaning, polishing and other machinery. These equipment are essential to give the art its much-required sheen.

With success of their initial work with the artisan community, the team from Vedanta is busy laying the blueprint for future. The target is to make these artisans independent, self-reliant and market ready. The company also wants to create access for these artisans to international art platforms. But to do so, work will be required to imbibe a sense of social advancement along with honing their skills. Currently, Vedanta is working with the villagers in providing information on government schemes and the benefits they can avail to uplift their life. Vedanta leveraged the change in the behaviour of the community through their ODF project, under the Swachhta Program, wherein the villagers built toilets in their households.

Vedanta is in talks with the District Industry Centre of Odisha for collaboration that would provide access to a better training facility and exposure in more reputed platforms with the government’s support. The company is also talking to several agencies for access to various commercial markets that will enable the artisans to increase income opportunity and earn national endorsement.

OSL Gives Away Free Reading Glasses To School Students With…