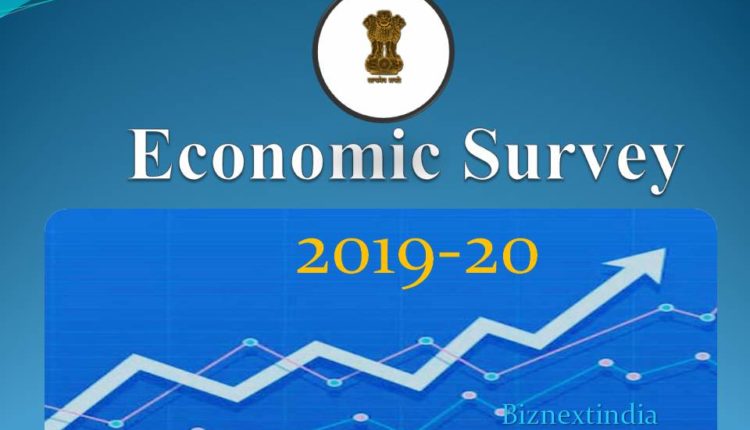 NewDelhi : The Economic Survey 2019-20 highlights that The Insolvency and Bankruptcy Code (IBC) has improved resolution processes in India compared to the earlier measures. The IBC proceedings take 340 days on an average compared to 4.3 years earlier and resulted in recovery of 42.5% amount involved compared to 14.5% under SARFAESI Act.  The Union Minister for Finance and Corporate Affairs Smt. Nirmala Sitharaman presented the Economic Survey in Parliament today.

The Economic Survey notes that monetary policy has remained accommodative in 2019-20 with a 110 basis points cut from 6.25% in April 2019 to 5.15% in October 2019. The Survey states that, “low inflation and need to strengthen domestic growth by spurring private investment” guided the rate cuts by the Monetary Policy Committee (MPC) of RBI.

The Survey highlights that personal loans continue to grow at a steady and robust pace in 2019-20 while the overall Bank Credit growth has moderated from 12.9% in April 2019 to 7.1% in December 2019. The Economic Survey observes that Monetary Transmission has been weak, for instance, the Survey notes that Credit Spread i.e. the difference between Repo Rate and the Weighted Average Lending Rate (WALR) is at the highest level this decade.

Further, the Survey points out that Capital to Risk Weighted Asset Ratio (CRAR) of Scheduled Commercial Banks (SCBs) has increased from 14.3% to 15.1% between March and September 2019. Similarly, Return on Assets (RoA) for SCBs recovered from (-) 0.1% to 0.4% during H1 of 2019-20. The Economic Survey finds that Gross Non Performing Advances (GNPA) Ratio of SCBs has remained flat at 9.3% since March 2019 to September 2019.

Furthermore, the Survey highlights that CRAR of the sector is at 19.5% in September 2019 as against a statutory requirement of 15 % also acknowledges the stress in the Non-Banking Financial Companies (NBFCs) as GNPA ( Gross Non-Performing Advances)  increased from 6.1% in March 2019 to 6.3% in September 2019.

The Pre-Budget survey observes that Systematic Liquidity has largely been surplus since June 2019 despite some episodes of forex sales in  July and August. The survey notes that first half of 2019-20 witnessed softening of the 10-year benchmark G-Sec yield due to subdued crude oil prices, surplus liquidity and change in monetary policy stance of UD Federal Reserve. The yield went up slightly and remained at 6.8% in December 2019 as MPC kept repo rates unchanged.

The Survey highlights a 13.2% growth in Reserve Money as in December 2019 whereas Broad Money growth picked up marginally defying the declining trend since 2009. Similarly, the Capital Markets witnessed some green shoots with total Public Issue from Primary Markets increasing by nearly Rs. 30,000 Crores. The total cumulative investments by Foreign Portfolio Investors (FPI) in Indian markets increased by 7.8 % to US $ 259.5 billion as on December 31, 2019. The Survey also points out that India’s benchmark indices Nifty50 and S&P BSE Sensex have reached record highs during 2019-20.