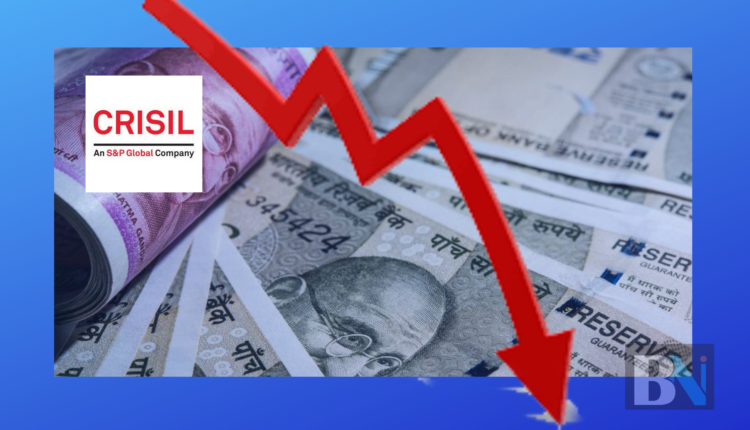 After Fitch, Goldman Sachs another leading  ratings and research agency Crisil has forecasted that India’s GDP will contract by 9 per cent in the 2020-21 financial year. The agency had predicted 5 per cent GDP contraction last May.

“CRISIL revises its real GDP growth forecast for India in fiscal 2021 to -9% from -5% projected in May. With the pandemic’s peak not yet in sight and the government not providing adequate direct fiscal support, the downside risks to our earlier forecast have materialised. If the pandemic were to peak out in September-October, GDP growth could move into mildly positive territory towards the end of this fiscal. Even in that event, manufacturing is expected to revive faster compared with services. But the risks to our outlook remain tilted to the downside till such time a vaccine is found and mass produced” said CRSIL.

The agency has said that in the second quarter (July-Sept), the GDP, which was contracted by 23.9 per cent in the first quarter, will improve and is likely to contract by 12 per cent.

Meanwhile, Crisil has forecasted that India’s CPI Inflation is expected to soften from the second quarter while the current account deficit will worsen to -0.8 per cent.

“We expect a permanent loss of 13% of real GDP over the medium term. In nominal terms, this amounts to Rs 30 lakh crore. This is much higher than a 3.0% permanent hit to GDP in Asia-Pacific economies (ex-China and India) over the medium run estimated by S&P Global in June1. Catch-up with the pre-pandemic trend value of real GDP would require average real GDP growth to surge to 13% annually for the next three fiscals – a feat never before accomplished by India.”

Earlier Fitch had predicted that Indian economy will contract by 10.5 per cent in FY21.

Infosys to hire additional 500 professionals in  Rhode Island by 2023

Job creation scenario to slip into the negative zone in FY21 : Care Ratings