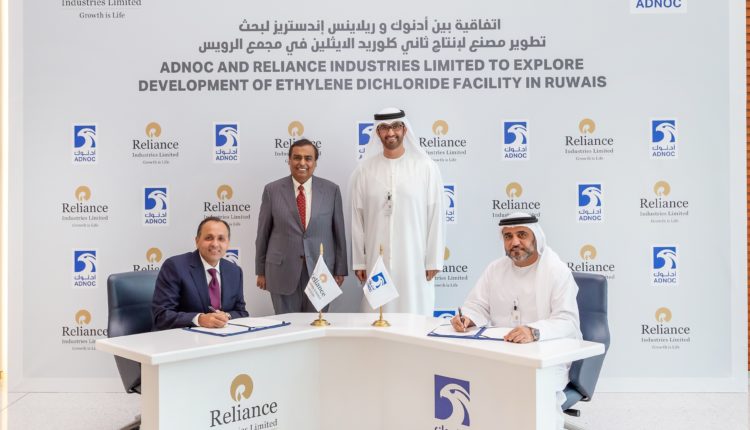 Under the terms of the agreement, ADNOC and RIL will evaluate the potential creation of a facility that manufactures EDC adjacent to ADNOC’s integrated refining and petrochemical site in Ruwais, Abu Dhabi and strengthen the companies’ existing relationship supporting future collaboration in petrochemicals.

ADNOC would supply ethylene to the potential joint venture and provide access to world-class infrastructure at Ruwais, while RIL will deliver operational expertise and entry to the large and growing Indian vinyls market, in which it is a key participant.

EDC is a basic building-block for manufacture of PVC, a polymer product in increasingly higher demand globally. PVC plays a critical role in the housing and agriculture sectors, and demand for PVC, particularly in the Indian vinyls market, is expected to grow significantly.

Mr Nikhil Meswani said: “This is a significant step towards Reliance’s commitment to pursue backward integration and will pave the way for enhancing PVC capacity in India to cater to the fast growing domestic market. This co-operation ideally combines advantaged feedstock and energy from the UAE with Reliance’s execution capabilities and the growing Indian market.”